What is the Mill Plain BRT project?

Is this the same thing that’s operating on Fourth Plain?

Sort of. The Mill Plain BRT system will be another branch of The Vine, which launched on the Fourth Plain corridor in 2017, but it will not be exactly the same. Mill Plain is a different corridor with different characteristics, and we’ve worked closely with residents, businesses and others to make sure the project reflects the needs and the identity of the area it serves.

After Fourth Plain, Mill Plain is C-TRAN’s second-busiest transit corridor. Route 37, which currently serves Mill Plain, carried more than 760,000 passenger trips in 2019. That strong ridership—and the ability to compete for federal funding—made Mill Plain the next logical step for BRT in Clark County.

Where will it go?

The Mill Plain BRT project will serve downtown Vancouver via Evergreen Boulevard, and extend east to a new Mill Plain Transit Center on East Mill Plain Boulevard near 184th Avenue. The preferred alternative was adopted by the C-TRAN Board of Directors after extensive comments from the public, stakeholders along the Mill Plain corridor and others.

While Highway 99 has been identified as a possible future BRT corridor, we’re not there yet. But C-TRAN will continue to look for other ways to improve transit service along Highway 99, such as traffic signal technology, which has improved travel times on that and other routes in recent years.

How much will the Mill Plain BRT project cost?

The total cost of the Mill Plain BRT project is $49.9 million. About $33.6 million of that is covered by federal grants including $4.3 million in federal Congestion Mitigation and Air Quality (CMAQ) funds awarded by the SW Washington Regional Transportation Council (RTC), with another $9 million covered by the state Regional Mobility Grant (RMG) program. About $7.3 million of the project cost will be covered by local C-TRAN funds. C-TRAN operates debt-free, and that won’t change with this project.

Will it cost more for me to ride?

Nope. Passengers riding BRT on Mill Plain will pay a regular Local fare, just like they do on The Vine on Fourth Plain.

When does it open?

The system is scheduled to open in 2023. Stay tuned! 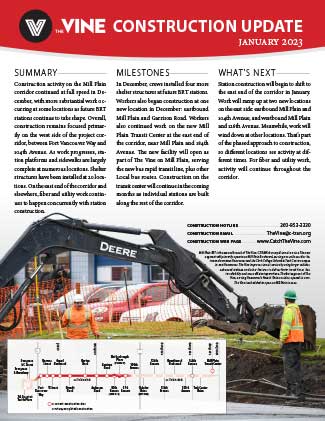 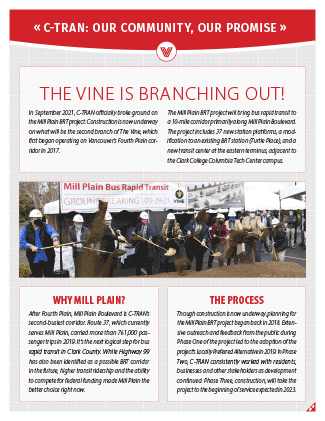